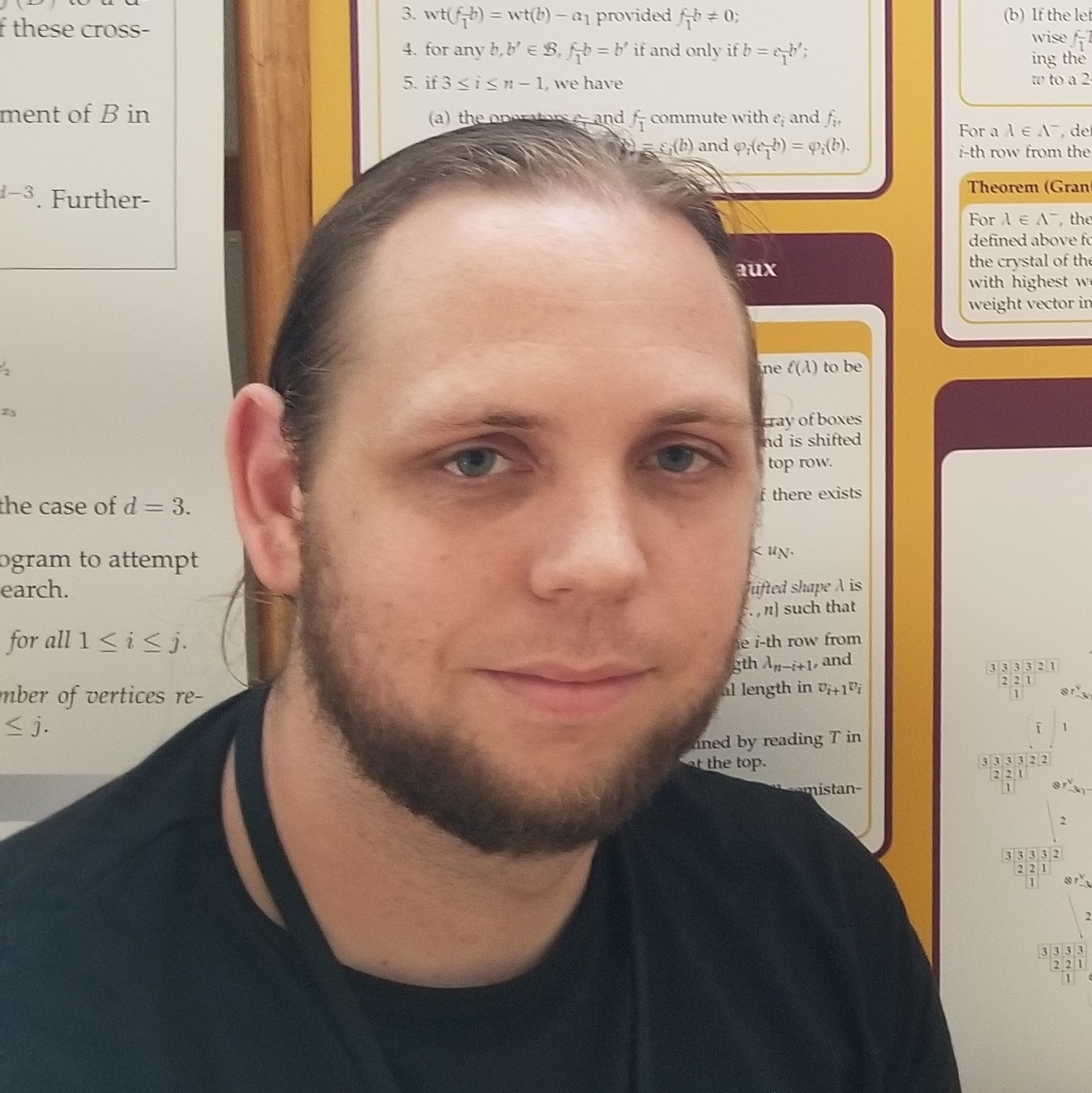 I am currently an assistant professor (助教) at Hokkaido University (北海道大学) affiliated with the Department of International Education Research in the Institute of Higher Education (高等教育推進機構 国際教育研究部) and the Department of Mathematics in the Graduate School of Science (大学院理学研究院 数学部門). I received my Ph.D. in Mathematics from University of California, Davis in 2015 under the guidance of Anne Schilling. From 2015 to 2017, I was an RTG Postdoctoral Associate as part of the combinatorics group at the University of Minnesota, specifically under the mentorship of Pavlo Pylyavskyy. From 2017 to 2019, I was a Postdoctoral Research Fellow at The University of Queensland under the mentorship of Ole Warnaar. From 2019 to 2021, I was a lecturer at The University of Queensland. From 2021 to 2022, I was a JSPS Standard Postdoc located at OCAMI (数学研究所) within Osaka Metropolitan University (大阪公立大学) and hosted by Masato Okado.

My primary research interests are in combinatorics and representation theory, specifically in the area of crystals and (Kac–Moody) Lie algebras. My research focuses on a specific class of finite crystals for affine Lie algebras called Kirillov–Reshetikhin (KR) crystals and combinatorial objects called rigged configurations. The (conjectural) bijection between tensor products of KR crystals and rigged configurations of objects arose from statistical mechanics and has led to applications in soliton cellular automata, a generalization of the box-ball system. In particular, this would give a (combinatorial) proof of the \(X = M\) conjecture. Characters of tensor products of KR crystals also have deep connections with other areas of mathematics, including (non)symmetric Macdonald polynomials and Q-systems. Ben Salisbury and I have also generalized rigged configurations to be a model for highest weight crystals, where they appear to be a very natural model.

Additionally, I am interested in generalizations of crystals; specifically in geometric crystals, a rational lifting of crystals, and crystals for Lie superalgebras and Borcherds algebras. Recently I have been working on developing a theory of crystals related to the K-theory of the Grassmannian and Schubert calculus and with stochastic processes. I have additional interests in combinatorial Hopf algebras, which includes symmetric functions, Coxeter and Artin groups, and Hecke algebras.

For more information, see my research page. Here is my publication list.

I have been a developer for the open-source mathematical software SageMath since 2010 and have been programming in various languages (C, C++, C#, Java, Python, etc.) since 2001. For books on SageMath, see Computational mathematics with SageMath (also available from a traditional publisher) and Gregory Bard's book.